The management of Radio Lagos/Eko FM has paid courtesy visits to the Consulate-General of the Federal Republic of Germany, Lagos, and that of the Republic of Cameroon to explore areas of mutual benefits to all parties.

The General Manager, Mr. Jide Lawal, led the team to forge a relationship that would bridge any communication gaps between the Consulates and the public, through the creation of awareness about the immigration processes and exchange programmes offered by the foreign missions.

Lawal also sought support on capacity building of the broadcast stations’ staff by Deutsche Welle as well as cooperation in other areas to enhance staff performance and efficiency.

Responding, the Acting Head of Mission of the Consulate General of Germany, Lagos, Dr. Bernd von Munchow-Pohl, expressed his Consulate’s delight in the training of the Journalists noting, however, that Deutsche Welle, a Dutch Radio Service, is an independent entity.

He expressed appreciation for the visit by Radio Lagos/Eko FM management, adding that the Consulate would help to secure invites for media personnel to the annual Global Media Forum to be organised by Deutsche Welle in May, this year.

On her part, the Consulate-General, Republic of Cameroon in Lagos, Mrs. Bessem Manga, thanked the management of Radio Lagos/Eko FM for the visit.

She anticipated a mutually benefiting relationship and invited the team to join her in watching the opening match of the African Cup of Nations that would take place in her country next Sunday. 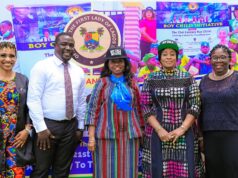