For some hours now, there has been uproar on the social media and in the country at large over the declaration of President Muhammadu Buhari as the winner of the 2019 Presidential election by the Tribunal after dragging the case for months.

This is no doubt not in favour of PDP’s Presidential candidate, Atiku Abubakar as he seriously lost out in the battle to claim the presidential seat of Nigeria.

It would be recalled that he claims the election result was manipulated to favour Muhammadu Buhari, which was the reason behind the court cases.

However, checks by this publication revealed that Primate Elijah Ayodele, a lagos based Prophet and the leader of INRI Evangelical spiritual church had warned Atiku Abubakar against pressing further charges in court.

“Atiku is just wasting money, it would be better he diverts the money he is spending on court cases to help the needy because he won’t be victorious’

He made this statement known to journalists during the launch of his annual book of Prophecy titled warning to all nations.

It will be recalled that before the election, the Prophet categorically stated that the only PDP candidate that can unseat President Muhammadu Buhari was Bukola Saraki but unfortunately, the party didn’t give him the ticket , which could have also contributed to their loss 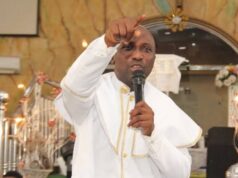