Wigwe , who with three other Nigerians received honorary doctor’s degrees from the university at its 6th,7th 8th and 9th combined convocation on Saturday in Gombe, said the bank was ready to engage the graduates if they accepted the offer.

The school graduated 3,958 students in various disciplines at the ceremony.

Speaking on behalf of other awardees, Wigwe, who received an Honorary Doctor of Administration award, commended the university for the remarkable achievement.

“ In spite of the security challenges in the region, the state government has put up a remarkable infrastructure in the institution in spite of its lean resources,” he said.

Wigwe also commended the graduates for the feat they achieved in their academic pursuits and assured them that with perseverance, the sky was their limit.

“A journey of a thousand miles begins with a step, it may take some of you several years after graduating to settle,” he said.

Other Nigerians honoured at the ceremony were Hajiya Amina Mohammed, Deputy Secretary-General of the UN, and Dr Christopher Kolade, a former Nigerian High Commissioner to the UK.

Another award recipient was the Emir of Gombe, Dr Abubakar Shehu, 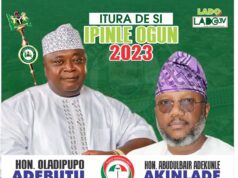