An Igbosere High Court in Lagos, on Tuesday, sentenced a 25-year-old Cameroonian housekeeper, Leudjou Joel, a.k.a William Smith, to death by hanging for the murder of his Nigerian employer, Miss Dayo, daughter of late Brig.-Gen. Adekola Adeleke.

Justice Adedayo Akintoye convicted Joel, after two years of trial, in which Joel pleaded not guilty to a one-count charge of murder.

In her judgment, Akintoye noted that “all the evidence points to the defendant. I find merit in the prosecution’s case.

“The defendant is hereby convicted as charged and is sentenced to death by hanging”.

The News Agency of Nigeria (NAN) reports that the Attorney General of Lagos State, Mr Adeniyi Kazeem, who led the prosecution team, had told the court that the foreigner stabbed his Nigerian employer to death over his rejected request for salary advance.

He said that the offence contravened Section 221 of the Criminal Law of Lagos State, 2011.

The prosecution, through its witnesses, said on the morning of the incident, Joel requested for a two-week salary advance but Adeleke turned him down.

The prosecution said that Joel got angry and stabbed the deceased in the neck and heart.

The prosecution said that Joel was apprehended at the gate of the deceased’s Park View Estate while attempting to flee.

The court heard that the deceased was found lying on the floor of her living room in a pool of blood with a kitchen knife was found stuck in the left side of her chest.

The prosecution said that the deceased was rushed to St. Nicholas Hospital in Lagos Island, where a doctor on duty confirmed her dead.

However, Joel, a refugee from Cameroon, had testified that Adeleke mistakenly stabbed herself after she fell while pursuing him with a kitchen knife.

Joel, who opened his defence on Nov. 21, 2018, denied killing Adeleke and spoke through a French translator.

He was led in evidence by his counsel, Mr C. Acnonye.

During his testimony, he confirmed that before the incident, he approached his boss twice to pay him part of his salary to offset some hospital bills because his child was very ill in Cameroon.

He stated that on the day of the incident, after cleaning her apartment, he knelt down and pleaded with the deceased to give him a loan but she became upset and started shouting.

He said the deceased “was screaming at me,” so he thought that it was the situation in her office that made her to shout.

”When I opened my eyes, I saw my employer with a knife. I tried to run away but she rushed towards me.

”She fell down while pursuing me and the knife stabbed her,” he said. 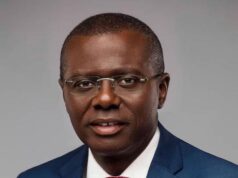