Popular Nigerian actress, Omotola Jalade-Ekeinde, has slammed the administration of former President Goodluck Jonathan, for allegedly wasting the country’s resources while it held sway for about six years.

The Nollywood actress, in a post on her Twitter handle, said Nigerians only appeared to desire a return to the Jonathan days only because the administration of President Muhammadu Buhari performed ‘below par.’

She wrote: “Jonathan administration was wasteful. Although, it was a way better time than now, it was not the best for Nigerians anyway.

“We cannot want a one-eyed cause its better than a blind.

“We must value ourselves to want full vision.”

Recall that Omotola had recently attacked the Buhari administration for allegedly making the country ‘hellish’ for Nigerians.

She had decried the ‘lack’ of money in circulation under the current administration, accusing the government of failing to stop recent extra-judicial killings in the country. 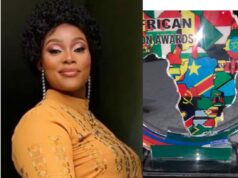