The CCT had, on Thursday, banned Onnoghen from holding public office for 10 years.

In his judgment over alleged non-asset declaration against Onnoghen, the Chairman of CCT, Danladi Umar also removed Onnoghen from office as the Chief Justice of Nigeria and Chairman, National Judicial Council, NJC.

Umar ruled that all Onnoghen’s monies deposited in his Standard Chartered Bank account in Wuse 2, Abuja be confiscated, seized and forfeited.

The CCT Chairman held that the monies in the affected five bank accounts were acquired illegally particularly as Onnoghen could not proved his source of income for the seized monies beyond all reasonable doubts.

Reacting to the ruling, Onochie warned that others would soon follow. 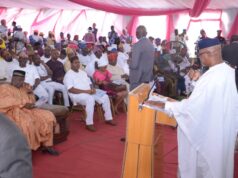