Access Bank is set to add Diamond Bank’s portfolio to its assets in the next few months, according to information obtained from those involved in the deal.

Discussions on the acquisition are on, according to sources, who said the fusion is set for the first quarter of next year, by both financial institutions have reached an agreement in broad terms on the acquisition, what is left is the valuation of assets, with a view to determining the level of compensation and systems’ integration.

It was learnt that the development leading to the impending acquisition was triggered by Diamond Bank directors who approached Access Bank for intervention in a bid to stave off a possible regulatory intervention that could lead to the withdrawal of the lender’s operating licence in the light of the bank’s depleting capital adequacy ratio on account of a huge Non Performing Loans (NPLs) portfolio put at over N150 billion.

Already, Access Bank directors have examined the proposal and after series of meetings and evaluations, accepted to acquire the entity. However, the agreement so far reached, it was understood, will not alter the name of Access Bank nor its management structure.

“It’s a complete acquisition and not a merger,” a source, who asked not to be identified, but who is familiar with the transaction, said, adding that one of the major considerations that swayed Access Bank’s directors in accepting the offer was the large branch network of the lender.

“It’s burgeoning NPLs, however, was of serious concern to Access Bank and almost becoming a disincentive, but it has been addressed,” the source added.

It was also gathered that the CBN is well acquainted with the development. The regulator’s acquiescence to the deal was informed by the recent event that led to the liquidation of Skye Bank, and the apex bank not being disposed to following that route because of the huge cost implication that a bailout of Diamond Bank might require, encouraged the discussions, “and the regulator is pleased with the level of discussions so far.

“The CBN encouraged the ongoing arrangement, given the fate that befell the defunct Skye Bank a few months ago. The apex bank gave its consent and approval for the actualisation of the marriage,” the source further stressed.

Bloomberg reported that a major investor was in the process of injecting funds into Diamond Bank on condition that the CEO, Uzoma Dozie, exits his position. The report attributed to the Chairman, Seyi Bickersteth, has since been denied by the bank.

Diamond is one of a number of smaller Nigerian lenders struggling to maintain a regulatory requirement for banks with international operations to have reserves of capital that cover at least 15 percent of outstanding loans. The company’s ratio stood at 16.3 percent at the end of September, the lender has said.

The bank cut its full-year profit forecast by more than half on Tuesday after income from operations declined. It now expects profit before tax to reach 3.8 billion naira ($10.4 million), down from a previous target of 8 billion naira.

The shares rose 2.5 percent on Wednesday, trading at 1.21 naira at the close in Lagos. The stock is down 19 percent this year, compared with a 12 percent fall on the NSE Banking 10 Index.

Diamond Bank, in a statement, said contrary to media articles, “the Board wish to clarify that the company has not received an offer from an investor to inject cash. Further to the Company’s announcement of 26 October 2018, Diamond Bank and its Board of Directors continue to review all strategic options on a regular basis.

“Diamond Bank would also like to clarify it enjoys the support of its major shareholders, including The Carlyle Group and Kunoch Holdings who are, as ever, working in cooperation with the Board and management as appropriate to ensure the successful operation of its business in Africa’s most dynamic banking market.

“Further to the announcement of 24 October 2018, Diamond Bank is in active discussions with regards to the appointment of new non-executive directors to the Board and, subject to CBN approval, these will be announced in due course.” 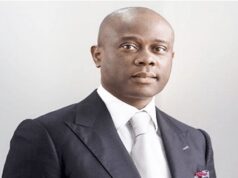