The Publicity Secretary of the All Progressives Congress, APC, in Lagos State, Joe Igbokwe, has reacted to the sudden appearance of the leader of the Indigenous People of Biafra, IPOB.

Igbokwe also claimed that the presidential candidate of the Peoples Democratic Party, Alhaji Atiku Abubakar, has taken over Kanu’s leadership position in IPOB.

He said that Kanu will not meet his followers when he returns to Nigeria because of Atiku.

The Imo-born politician said this in a Facebook post on Friday, where he also mocked those who believed that President Muhammadu Buhari sent the army to kill Kanu.

Media reported that a video surfaced online yesterday where the IPOB leader was seen donning a Jewish outfit as he prayed at the Wailing Wall in the City of David, Jerusalem.

The IPOB leader was last seen in Nigeria on September 10, 2017, after military men invaded his residence in Afaraukwu community in Abia State.

“I thought they said PMB’s army has killed our own Nnamdi Kanu. Now the play boy is in Jerusalem enjoying his life,” he wrote on Facebook.

“Will Nnamdi Kanu meet his followers when he returns? I do not think so.

“Atiku Abubakar, a Fulani from Adamawa is now their Spiritual leader.” 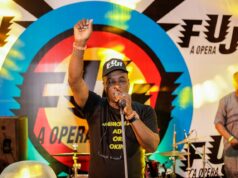