Former minister of Aviation, Femi Fani-Kayode has reacted to the re-appearance of the leader of the Indigenous People of Biafra, IPOB, Nnamdi Kanu.

Media reported that a video surfaced online yesterday where the IPOB leader was seen donning a jewish outfit as he prayed at the Wailing Wall in the City of David, Jerusalem.

The IPOB leader was last seen in Nigeria on September 10, 2017 after military men invaded his residence in Afaraukwu community in Abia State during the Operation Python Dance II.

Reacting to sudden re-appearance of Kanu, Fani-Kayode on his Twitter page on Saturday listed some popular freedom fighters who are now deceased and added Kanu’s name at the bottom of the list as “Resurrected”.

Meanwhile, the Biafra Leader is set to speak for the first time, since he resurfaced in Jerusalem on Friday.

A statement sent to DAILY POST by Emma Powerful, the Media and Publicity Secretary of IPOB, disclosed that Kanu will address Biafrans on Sunday, October 21, at 6pm. 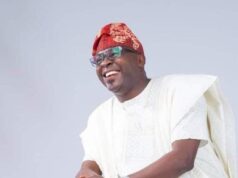