President Muhammadu Buhari has reacted to the acquittal of Senate President Bukola Saraki by the Supreme Court.

He stated that the country’s judicial system, no matter the challenges it faces, is truly working and no one should be allowed to undermine or break it.

President Buhari’s reaction was contained in a statement on Saturday by his spokesman, Garba Shehu.

He said: “I have seen many instances where individuals and groups seek the destruction of the judicial institution in the foolish thinking of saving their skin, instead of going through the painstaking process of establishing their innocence.

“In the case of the Senate President, Bukola Saraki, I have seen him take the tortuous path of using the judicial process. He persevered, and in the end, the highest court of the land, the Supreme Court, says he is not guilty as charged.

“This is what I have done in the three elections in which I was cheated out, before God made it possible for me to come here the fourth time I ran for the office.”

The President said the Senate President’s journey from the lowest to the highest court of the land provides an important example for Nigerians to emulate.”

In his reaction, Saraki reiterated his confidence in the judicial process and the ability of the Judiciary to do justice in all circumstances.

He also expressed gratitude to all Nigerians who have supported him since the case commenced three years ago. 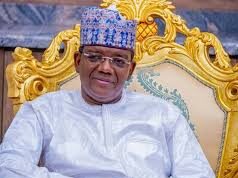