The statement was endorsed by the Supreme Council of Bishops; the World Council of Bishops; The Global Advisory Board; the Global Council of Apostolic Nuncio (s); and the Prelate and its Deputies across all 7 continents of the world; the Central Executive Council Globally; all Regional and National Prelates Worldwide, and the General Assembly Worldwide.

The Bishops in the strongest possible terms condemned the incessant killings and manslaughter of Nigerians by the Fulani herdsmen who allegedly call themselves Miyetti Allah Group and the like.

They also sent their deepest condolences to all of the affected communities, and demanded that all the perpetrators of the heinous crime be brought to justice, and ensure any further future violence is sternly prevented.

The cleric noted that, “Two years have gone down the drain. We as a Global Council watched, observed, prayed and fasted earnestly, how innocent lives of the good citizens of Nigeria are been attacked, property destroyed, some confiscated, and their lives been wasted in broad daylight manslaughter, as Catholic Priests, Parishioners, Worshipers in Churches, Villages, and Cities around the Middle Belt region, North Central States, and part of the North Eastern States, and across the Nigerian State as a whole were not left out, times without number.

“We expected the Government of Nigeria under the able leadership of President Muhammad Buhari GCFR, as it has promised to defend, secure, and protect the lives of Nigerians as enshrined in the Constitution of the Federal Republic of Nigeria, 1999, Chapter II, Section 14b), to take a decisive – workable solution to permanently curtail the excesses of the Fulanis and their herdsmen from taking laws into their hands, but these killings keeps aggravating.

“We as a Global Council of Bishops Worldwide, lend our Global Bishopric Voice and Global Bishopric Support on All the States in Adamawa, Benue, Nasarawa, Plateau, Taraba, Kaduna, Zamfara States, in the Middle Belt Region, the North Central, North Eastern States, Eastern and Southern regions of Nigeria whose People have been slaughtered and properties destroyed, do hereby unequivocally make Our Global Bishopric Stands known today that, Enough Is Enough – Henceforth This Killings Must Stop!”

Continuing, the Bishops pointed out that a father who fails to perform his primary duty of deciplining his straying children will always regret it at last.

They added, “A father who does not govern his home properly, where he sees and hears his children or wards under his care, are misbehaving outside the home, and several reports are made of their rascally misbehavior, and as a father, shields them, and at times feigns knowledge and never corrects them, by ensuring proper disciplinary actions are meted out on the children, so as to preserve their lives and future, will one day regret the consequences of his lacklustre attitude, not only to the detriment of the family name, but also to the detriment of his children’s future , thereby endangering their future as his progenity, if proper care is not taking or given to their proper training and upbringing as his wards, has indeed failed woefully as a Father.

“Mr. President, we as a Council of Bishops Globally point it out to you on this day openly, without fear or favour that, you as a leader of the Federal Republic of Nigeria has failed , not to deliver on your campaign and constitutional promises, as the number one Chief Security Officer of the Federal Republic of Nigeria to uphold, defend the sovereignty, the territorial integrity, and security of the Nigerian Nation and its Citizens. But what do we see and hear, you only visit each of these troubled States that have been under the attacks of the Fulani herdsmen, without taking a permanent decisive solution to the spate of killings across the Nigerian State in the future, not minding whose ox is gored. The Ball is still in your court either to do as it pleases You, or to act rightly as it is expected of you as enshrined in the Constitution of the Federal Republic of Nigeria, as All Nigerians are closely watching, and judging your actions and misactions in the secrets of their hearts against 2019 elections.

“You are duty bound to ensure the safety of every life and properties of the citizens of the Federal Republic of Nigeria, and that one life in this nation Nigeria counts and matters a whole lot. If you decide to go as you will, posterity shall never forgive or forget you. Wisdom demands you take queue and learn from the mistakes of Nigeria’s past leaders and do the right thing that Nigeria as a Nation expects of you.

“Also, a group of persons or collective individuals who, take laws into their hands through maiming, shedding of innocent blood, and destroying the lives and properties of citizens of a Nation like Nigeria, should be counted as a terrorist group.

“To this effect, We employ, the United Nations(UN), Africa Union (AU), European Union (EU), the Economic Community of West Africa (ECOWAS), and the Nigerian State to view and list the Miyetti Allah group via the Fulani Special Force and the Fulani Nationality Movement (FUNAM) as a terrorist organization henceforth, as they have remained unrepentant, and no decisive legal and official governmental action have been taken as a Nation to put to stop their dastardly and heinous acts against humanity and Nigerians as a whole. Justice and Protection of ordinary Nigerians are the inalienable rights of All Nigerians irrespective of religion, social, political class and status, educational attainments, etcetera.

“More also, it is pertinent to not that, with the spate of killings of unarmed innocent Nigerians across the length and breadth of the Nigerian State that, a State Police be enacted and created, and not to be always dependent on Federal might, with a view to, combat , reduce, and defend each of the troubled and 36 States of Nigeria’s Federation that are under constant attacks by the herdsmen militia, and the unrepentant insurgents all over the Nigerian State covering each of the 6 geopolitical zones of Nigeria nationwide.

“ As the Inspector General of Police, nor the Chief of Defence Staff and Army Staffs, cannot achieve the security of lives and properties, and territorial integrity of the Nigerian State, and Nigerians alone, as can be seen how many Soldiers, Police, and security operatives that were previously deployed lost their lives unceremoniously, as they are suffering in some sort, especially those of them in the hard hit insurgent troubled States, they also need our collective, communal support and assistance as well.” 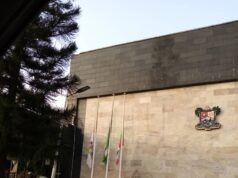