A Yaba Chief Magistrates’ Court in Lagos on Monday ordered four men to be remanded in Ikoyi Prisons for allegedly killing their brother and removing his heart for ritual.

They are standing trial on a two-count charge of conspiracy and murder.

The Prosecutor, Sgt. Modupe Olaluwoye, told the court that the men committed the offences on May 22 at Alasia along Oke-Ira road in Ajah, near Lagos.

Olaluwoye alleged that the accused had been patronising a ritualist, who asked them to provide a human heart in exchange for wealth.

She said that the accused had lured their 21-year-old brother, James Isaiah, into the bush, where they killed him with a knife and cut off his heart.

“The police were able to trace them to their house where they had admitted killing their brother for ritual purposes.

“The ritualist is however, still at large,” Olaluwoye said.

The accused, however, pleaded not guilty to the charges.

She, however, adjourned the case until August 15. 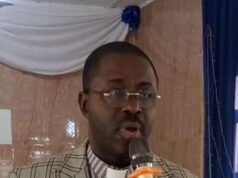