“My lord, he’s a liar and deceptive in nature. He gave my family members the impression he is a caring and loving husband when he told them he bought our children provision. He likewise stated that he bought me ingredients to cook stew. What he bought our children were a sachet of Milo sold at N40 and N50 worth of Peak milk. He bought ordinary bell pepper without tomatoes, onions and meat to cook stew and these I threw away.”
Mojirayo has approached Oja Oba/Mapo Court C Customary Court, Mapo, Ibadan, Oyo State, pleading that her 15-year-old union with her husband be dissolved on accounts of neglect and battery.

She further prayed the court to grant her custody of their three children and restrain him from coming to harass or fight her in her home or work place if her prayer was answered.

“I have known no peace since my husband took a second wife. He’s in the habit of beating and leaving me with swollen face. (She presented the court with pictures of her swollen face the last time they fought).

“We once had a minor misunderstanding early in the morning after which he left home. I got a call from my brother in-law hours after that my nephew was involved in a motor accident. I was dressing up to go and check on my nephew when my husband returned. He demanded to know where I was going and I explained to him what had happened.

“He picked his phone and rather than commiserate with my brother in-law, he shouted on him and accused him and my sister of always finding excuses for me to leave home.

“He held my clothes and insisted I wasn’t going out. We ended up fighting. He tore my clothes, bra and underskirt and left me with only my pant on. He descended on me with punches and concentrated more on my face. I nearly went blind. I ran to our neighbour’s apartment when I couldn’t take his beatings any longer. He went after me and continued to beat me despite attempts made by our neighbour to restrain him. I made an attempt to run out of our compound, but he outran me and locked the gate. It was the vice chairman of the landlord association of our area that came to my rescue. He brought a carpenter to force open the gate and helped in settling our differences, “she stated.

“At another time my rival and I had a misunderstanding and we fought. Instead of mediating in our differences, he took side with his second wife and beat me. He hit me with a belt and didn’t stop until the buckle hit me in the eye and blood gushed out.

“Our neighbours called and informed my mother and siblings what was going on and they rushed to our place.

“The vice chairman of our neighbourhood landlord association was again called who on seeing the state of my face and eye requested that my family members take me away till our differences were resolved.

“I moved towards my wardrobe to remove some of my clothes, but he insisted I wasn’t taking anything out of his house. He accused me of being diabolical when he saw a bottle of oil I used for prayers in my wardrobe.

“While removing my things, he and my younger brother exchanged words. He slapped my brother and he slapped him back.

“After I left and moved in with my mother, he came to her place when I was not around and fought her. He also threw stones at her windows and doors, “she added.

“I moved out of my mother’s place and rented another apartment and he still came there to beat me. He came one day with a sachet of Milo and Peak milk which cost N40 and N50 respectively and three eggs for the children and he went about telling everyone who cared to listen he bought us provision.

“Weeks after, he brought only bell pepper to prepare stew for the children and went about announcing he bought us meat and other ingredients to make stew. I threw the pepper he brought away.

“He later came with a fan for the children.’

“My lord, he gave me and our children little or nothing as feeding allowance. He bought me a grinding machine after I complained about the low feeding allowance and told me to use the income from it to feed the home. Since then he stopped giving me money.

“We both bought a deep freezer to run a business, but he later gave it to his second wife, “she concluded.

He stated thus: “My lord, my mother in-law has never been in support of our marriage from the outset. She was always seeking for excuses for my wife to leave me.

“I bought her a grinding machine when she complained the feeding allowance I was giving her was not enough. I also bought her a deep freezer but she never showed appreciation for all I did.

“There was never a time she washed my clothes for the 15 years we were married and she also neglected other duties expected by her.

“I took a new wife when she became quite unruly. She’s stubborn and any time we fought, she would wait till I beg her. She, her mum and siblings took to fighting me after I took another wife.

“Her mum came to pack her belongings from my home the last time we fought. My lord, I want her to return the grinding machine I bought her before she leaves me, “he told the court. 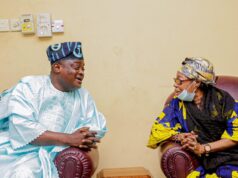